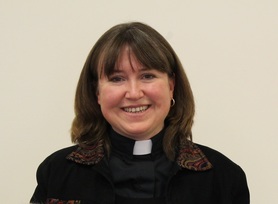 Pastor Lori Morton
Pastor Lori Morton was born and raised in a suburb west of Denver, Colorado. Thanks to her parents, she encountered God’s grace at an early age through the people of Lutheran Church of the Resurrection in Lakewood. Seeking a liberal arts education near downhill skiing, Pastor Lori ended up at St. Olaf College in Northfield, Minnesota. While the skiing did not come close to her experiences in Colorado, she loved her time up north and graduated with a B.A. degree in biology/premed with hopes of entering Medical School to become a doctor. God had other plans.  After two years working as a research assistant at a small start-up biotech company back in Denver, it became clear she was being called to offer a different form of healing to people. This led her back to Minnesota, where she graduated from Luther Seminary with a Masters of Divinity. Pastor Lori received her first call as an Associate Pastor at Lutheran Church of Hope in Broomfield, Colorado and was Ordained in the Evangelical Lutheran Church of America. Four in half years later, American Lutheran Church in Ashland, Nebraska called her as their pastor. There, she more deeply connected with her parents’ and grandparents’ roots, who all grew up in the Cornhusker state. Also, she learned how to live the small town life among people with generations of connections within the community.  Pastor Lori is incredibly grateful for the eleven years she served among the people of Ashland and the ministry they shared. Yet, God’s spirit started stirring again early 2015 and she found herself crossing the Long Bridge into Sandpoint, Idaho where she began her call as Pastor of First Lutheran Church on Sept. 1, 2015.

She and her dogs, Ginger & Louie enjoy walking trails around town. She may be found putting in some runs at Schweitzer in the morning. Also, she is enjoying all the fabulous food options, along with the arts and music this community provides. 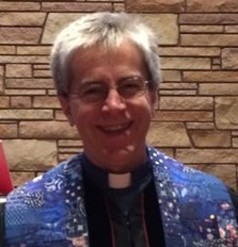 Pastor Steve Neuder
Pastor Steve Neuder grew up in Sandpoint, graduated from Pacific Lutheran University, and headed to Southern California where he worked in Theater for nearly 20 years. He eventually attained a Master of Divinity degree from San Francisco Theological Seminary / Southern California, was ordained and served as Associate Pastor at Pasadena Presbyterian Church. As he and his wife became blessed with 2 daughters, the family moved back “home”. Once back in Sandpoint, Steve followed in his father’s footsteps by “filling holes” (his dad was a dentist) – preaching in several area churches when their pastors were away. Steve became a temporary part-time Chaplain at Valley Vista Care Center while permanent staffing of the position was in progress. He went on to serve in a similar part-time capacity at Bonner Community Hospice, where he continues to this day.
​
In August, 2008, Steve became the part-time Associate Pastor of First Lutheran Church. His focus is on Pastoral Care as he greatly appreciates the opportunity to be with folks as they wrestle with Faith & Life.
​"Come on by. Let’s talk."